She Was Diagnosed With Cancer While 13 Weeks Pregnant 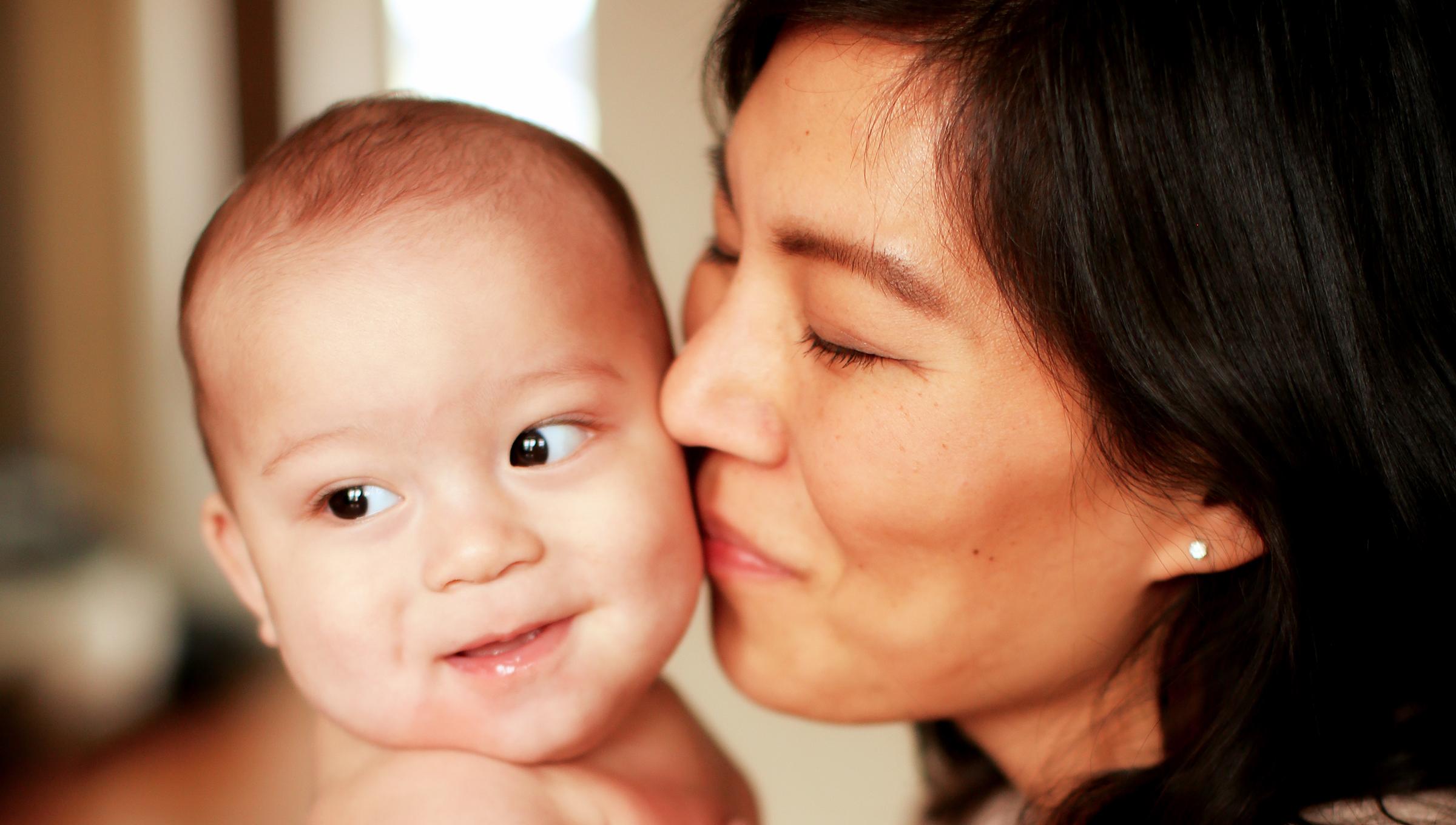 This story begins with a birthday and a pregnancy. It ends 21 months later with another birthday and — at long last — a baby.

Back in December 2016, Gina Lee Gossett and her husband Dan had a lot to celebrate from their home in Hamilton, Montana. It was Lee Gossett’s 32nd birthday, and the Seattle transplants and avid travelers were still reveling in their recent bucket-list trip to Machu Picchu, Peru. Their favorite soccer team, the Sounders FC, had also just won their first league championship. And Lee Gossett discovered that she was pregnant.

“I was really excited that getting pregnant happened so easily for us,” says Lee Gossett, who made sure to wait three months after returning from Peru to start trying for a baby due to Zika concerns. “I even said how easy it was out loud, and it came back to bite me.”

Early signs and a stunning diagnosis

By late December, their celebration had morphed into concern.

Lee Gossett’s early-pregnancy nausea suddenly disappeared a few weeks after Christmas, and she began to notice unusual discharge in its place. Had she miscarried?

An ultrasound at six weeks alleviated her fears. The baby — what Lee Gossett says looked like a little sea monkey — was still there, heart beating steadily along. The doctor prescribed antibiotics for the discharge, and Lee Gossett thought that was the end of that.

“The day before my 12-week prenatal appointment, I had some light pink discharge, and I was really worried that I had miscarried,” Lee Gossett recalls. “My doctor in Montana decided to take a look again, and that’s when she noticed there was a bump on my cervix that she hadn’t seen in December.”

Her doctor ordered a colposcopy to check her cervix for abnormal cells and sent it off for testing. A few days later, Lee Gossett was asked to come back in.

The bump was cervical cancer.

“I couldn’t believe it,” Lee Gossett says. “I was just numb.”

The search for care begins

Lee Gossett spent the next few hours in a fog, letting Dan and her family reach out to various cancer care centers around the country. They scheduled a consultation with a healthcare organization in Texas, but many others told them that they didn’t accept pregnant women as patients. Finally, Lee Gossett decided to call UW Medicine, too.

“I went to the University of Washington, all my friends live in Seattle and I knew I would be more comfortable getting care there,” she recalls. “All I knew was UW was home for me.”

Lee Gossett received her diagnosis in Montana on a Wednesday. By Monday, she was in Seattle for a consultation. And that next Wednesday, she was off to Texas for the other consultation. It was back to traveling — this time for a much different reason.

At UW Medicine, Lee Gossett met with Dr. Barbara Goff, chair of the Department of Obstetrics and Gynecology who sees patients at University of Washington Medical Center. They discussed her treatment options and the best ways to preserve her pregnancy.

“It was a very challenging diagnosis and very time sensitive, both in terms of the baby and the mom,” Goff says. “We saw her, we ordered an MRI and we crafted an initial plan.”

Working in tandem with Dr. Edith Cheng, a maternal-fetal medicine specialist at UW Medical Center who would handle the maternity care side of things, Goff laid out a best-case scenario.

Goff hoped to perform a small operation called a cone biopsy to remove the cancer from the cervix and lymph nodes from the pelvis to check if Lee Gossett’s cancer had spread. If it hadn’t, then Goff planned to remove Lee Gossett’s cervix completely. Cheng would follow up by placing a stitch around the lower portion of the uterus to help maintain the pregnancy.

“If you think about the nub of a balloon, which is effectively the cervix, we’re basically cutting the nub away,” Cheng says. “Now you just have the balloon and really nothing. We didn’t know if the stitch was going to be successful or not, but it was something we were willing to try in order to salvage the pregnancy because that was what the family wanted. Otherwise, we would lose the entire pregnancy.”

By the time Lee Gossett returned to Montana, a little more than a week after her initial diagnosis, she was emotionally wiped out.

Goff called to let her know that the planned biopsy and surgery was now off the table because of a pregnancy condition she had called placenta previa, which affects about 2% of pregnancies and can lead to bleeding during pregnancy. They didn’t want to risk a massive hemorrhage and had to think up another game plan.

The next day, though, Lee Gossett came down with a fever of 104 degrees. Doctors admitted her to the hospital immediately.

“I had some sort of infection, and the doctors in Montana couldn’t figure out what it was,” recalls Lee Gossett, who later found out that her infection was due to subchorionic bleeding, a rare condition where blood accumulates between the uterus and the placenta. “By that time, I had decided to go with UW Medicine for my treatment because they had the full team that I wanted for both cancer and my pregnancy, so my doctor in Montana said they’d have to fly me out to Seattle.”

Lee Gossett was ambulanced an hour north to Missoula, where a winter storm had settled in, making a helicopter landing impossible. Hours later, she was finally flown on a fixed-wing Airlift Northwest plane to Boeing Field — her fourth flight in less than two weeks. After another ambulance ride, Lee Gossett arrived at the intensive care unit at UW Medical Center. She was immediately diagnosed with sepsis, a life-threatening condition caused by the bleeding and subsequent infection.

“They gave me medication, and I had to get an IV in my neck,” she says. “It’s kind of a blur, but I remember getting a lot of ultrasounds. I stopped shaking and having body aches. My fever broke.”

Lee Gossett stayed in the hospital for seven days, receiving constant fetal heartbeat monitoring. The day before she was to be released, she had another ultrasound. This time, they couldn’t find a heartbeat. Lee Gossett had lost all of her amniotic fluid due to the infection, and the baby hadn’t survived.

Not the end of this journey

Dark days followed, and Lee Gossett says she pretty much blocked the world out. But even in those lowest of moments, she clung to something that Cheng had told her: “I see our journey ending with me handing you a baby of your own.”

Cheng attributes this partially to her maternal side, trying to comfort someone that could be the same age as her daughter — but also because she knew what was medically possible.

“I knew surrogacy was here, and I knew all the advances that we’re making in ovarian and embryo preservation,” Cheng explains. “I knew that it could certainly happen and that this was not the end in terms of them being able to have their own biological child.”

The tumor had spread and was larger than anticipated. Goff recommended Lee Gossett undergo a complete hysterectomy to remove her uterus, followed by radiation and chemotherapy.

“That was a devastating day for her — and for all of us,” Goff says. “So I picked up the phone and called Dr. Genevieve Neal-Perry.”

It’s pretty common for doctors at UW Medicine to personally call or text one another to coordinate care for patients, Neal-Perry says, especially for those with pressing health concerns. So when she received Goff’s call, she jumped into action.

Within an hour, Lee Gossett was in Neal-Perry’s office at Reproductive Care Clinic at UW Medical Center-Roosevelt to discuss her fertility preservation options.

“When I met Gina and her husband, she was emotionally distraught and terrified that she would not have a happy ending,” Neal-Perry says.

But after evaluating Lee Gossett, Neal-Perry reassured her that they could fit in one, possibly two, rounds of IVF before Lee Gossett’s scheduled hysterectomy eight weeks later. In the end, they only needed one round of IVF and ended up with seven normal embryos.

“Her ovaries responded spectacularly to the stimulation medication, and once we were able to complete the IVF cycle and she saw the outcome, it was an incredible relief to her,” Neal-Perry says. “From my perspective, that gave her a sense of hope and security, as well as the confidence to move forward with her life-saving care.” 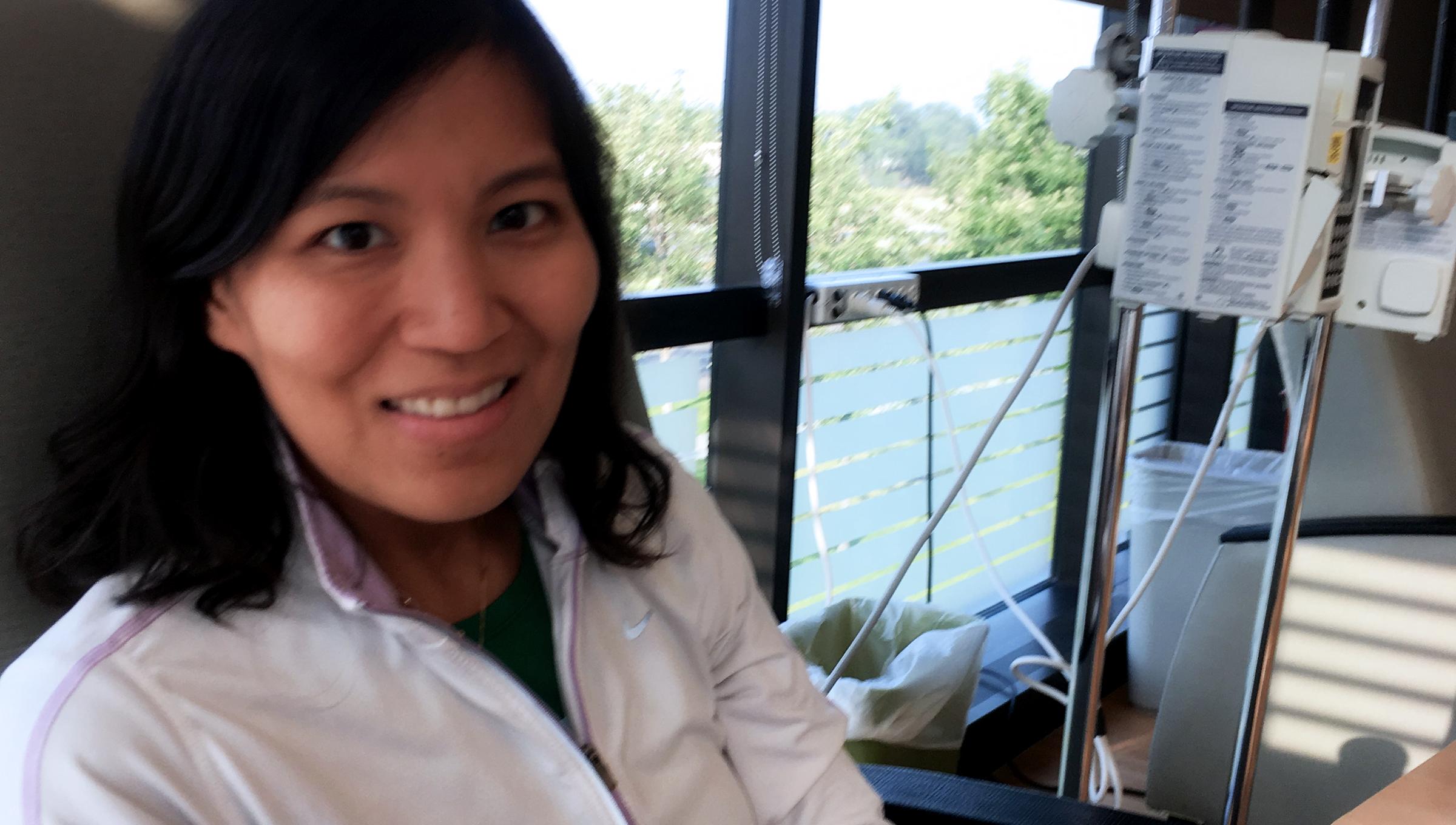 Finding a rainbow at last

Three days after that first meeting with Neal-Perry, Lee Gossett posted a quick health update on Facebook and asked for help finding a gestational carrier, otherwise known as a surrogate. Her friend Lori Ross, who she and Dan knew from their days in a Sounders FC supporters group, reached out within an hour.

“I made an ask and she was like, ‘Yeah, that seems like a good thing to do,’” Lee Gossett says. “Lori is just an amazing person.”

Finally, things were going smoothly. Lee Gossett’s hysterectomy was a success, and so were her chemo and radiation treatments back home in Montana.

Ever the frequent traveler, she flew back and forth to Seattle several times over the next several months for the embryo transfer with Neal-Perry, follow-up care with Goff and some of Ross’ prenatal check-ups with Cheng. Goff and Cheng coordinated schedules so the two friends could book their appointments together. And when Lee Gossett couldn’t fly out, Cheng and Ross made sure to video chat with her during every appointment.

In the end, Cheng’s prediction was right. Oliver was born on July 26, 2018, and Cheng was able to hand Lee Gossett the baby she had been promised.

“Dan and I couldn’t stop crying,” Lee Gossett recalls. “We had all this pent-up emotion for a year, where we had so much hope but also so much fear that something was going to happen again. It was the happiest moment of our life.” 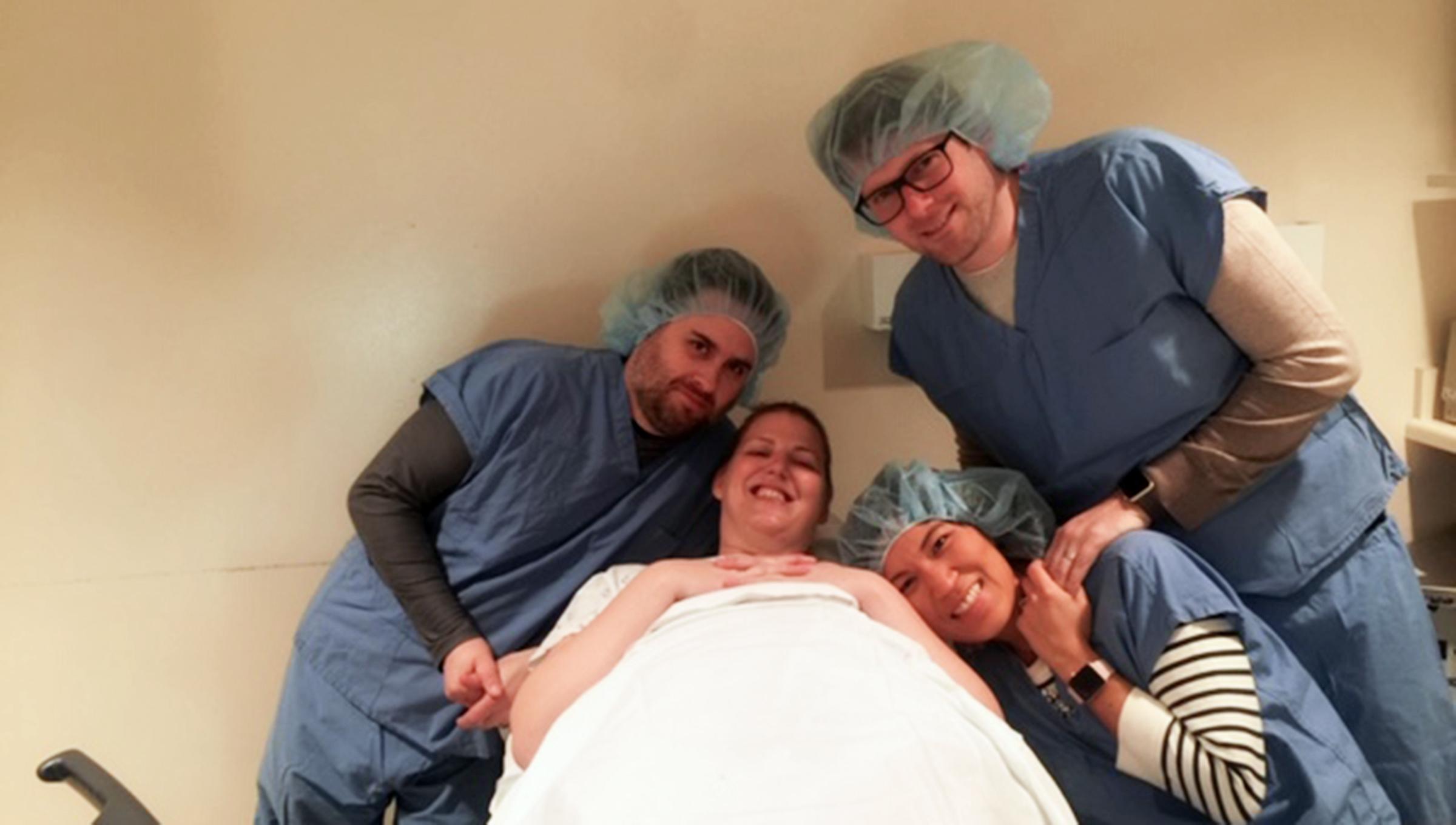 Ross and Lee Gossett on the day of the embryo transfer.
Courtesy Dr. Genevieve Neal-Perry

Goff, who still has regular follow-ups with Lee Gossett and has met Oliver on several occasions, credits this story’s happy ending to teamwork.

“One of the big advantages of having a comprehensive cancer center like ours is that we have the obstetrical piece and we have an exceptional fertility group,” she says. “I can pick up the phone and have one of my colleagues fit in a patient the same day. This just highlights how bringing all these experts together really produces exceptional outcomes.”

For Lee Gossett, well, she’s already dreaming of the trips they’re going to take as a family — like an African safari once Oliver turns 7. But for now, she’s just grateful for her incredible friend Lori and the medical team who saved her life and fulfilled her dream of becoming a mom.

“I’m so thankful to UW Medicine and all the doctors and nurses we had,” she says. “I know that I made a good decision to get my treatment done here. It was a harrowing journey, but I got my baby in the end.” 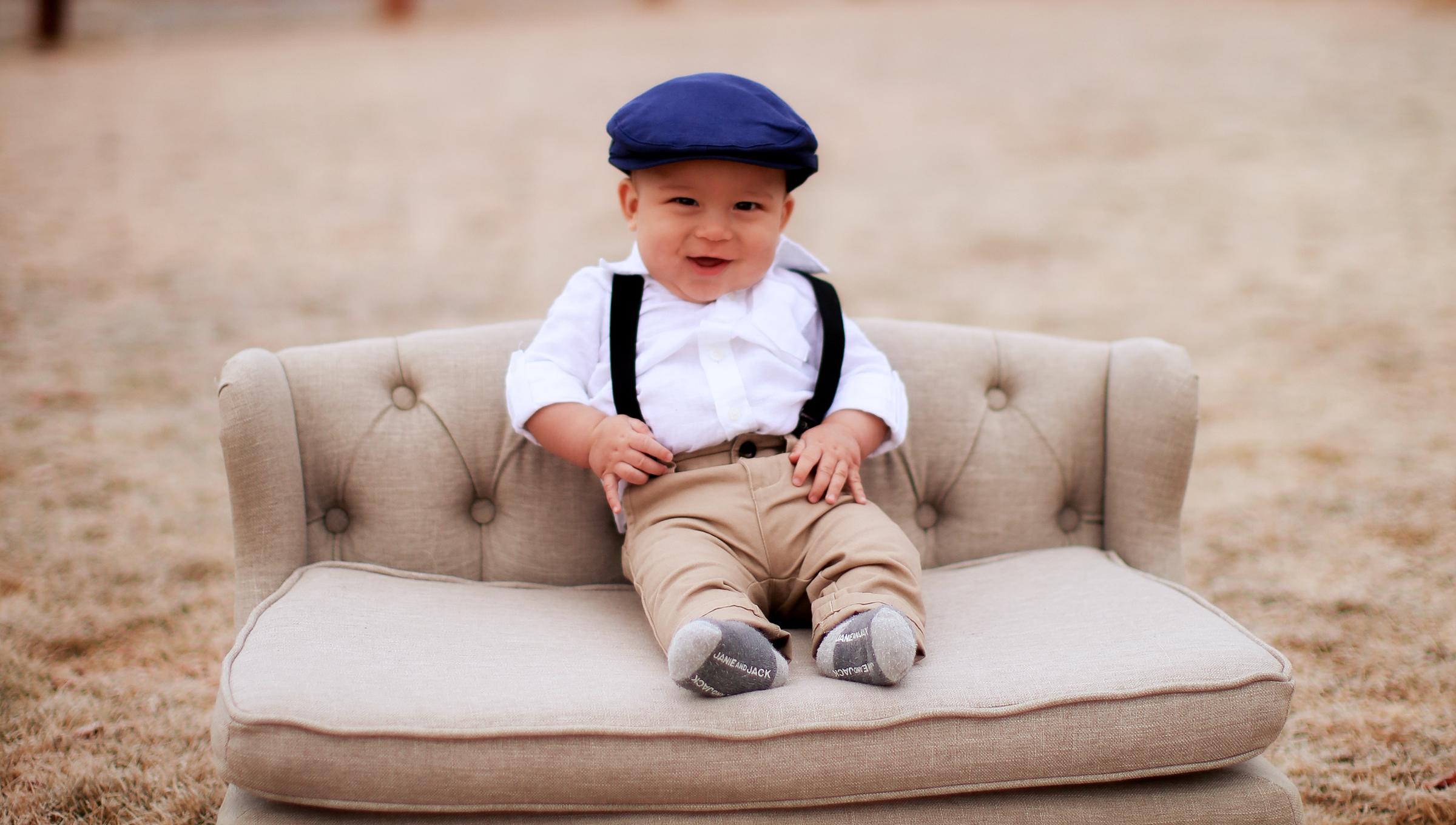