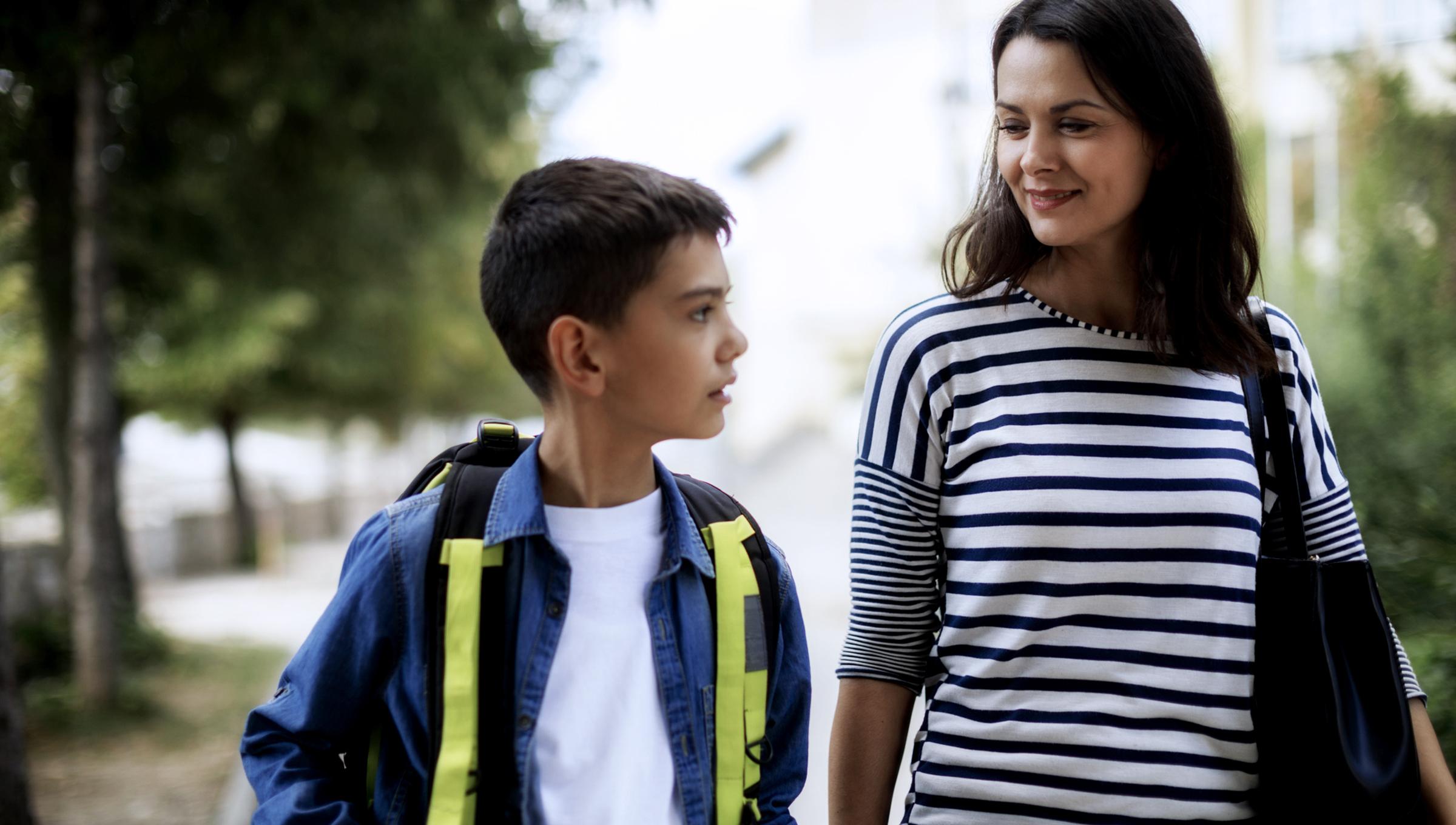 Some people like to paint childhood as a carefree time when life is less stressful. While that may be true sometimes, it’s also true that children can experience serious problems with mental health.

The Child Mind Institute’s 2016 report estimates that 1 in 5 U.S. children meet the criteria for having a mental illness.

While not all mental health-related issues kids and teens face will be diagnosable as mental illness, some will.

Kids and teens who feel supported during a difficult time typically are better equipped to deal with their mental health struggles and have better chances for healing and recovery, says Georganna Sedlar, a clinical psychologist and an assistant professor in the Department of Psychiatry and Behavioral Sciences at the University of Washington School of Medicine.

“Caregivers play an important role in being able to help kids who are struggling with mental health problems,” Sedlar says.

Kids and teens handle long-term stress and other mental health issues in dramatically different ways. Some will withdraw and isolate themselves, others will start acting out and some might suffer in silence.

Age can play a role in how a child responds to stress and acts because of it, says Dr. Doreen Kiss, a pediatrician and the clinic chief at the UW Neighborhood Kent/Des Moines Clinic.

“In younger kids, very often anxiety will present as behavior changes and no one thinks of anxiety. You see a child who’s irritable, who’s tantrum-ing, who’s unwilling to try new things and is avoiding school,” she says.

Young children may not have the self-awareness to say they feel anxious or depressed, Kiss says. However, they will know that something is wrong and that they don’t feel good.

Teens are more likely to voice their emotions or concerns they have about their mental health, or behave in ways that are more suggestive of mental health struggles — like isolating themselves in their room all the time, Kiss says.

How to recognize your kid is stressed

Sometimes you’ll notice a clear change in your child’s behavior and will talk with them about it, which may lead to a visit to the doctor to see what can be done to help.

More often, Kiss says, the issue will go undetected until the kid or teen is at the doctor for another reason, and something comes up that leads to them talking about how they’re feeling.

At the clinic where Kiss works, all patients age 12 and up are screened regularly for mental health issues like anxiety and depression. The screening is a simple form they fill out prior to their appointment. But it ends up catching a lot of mental health issues kids and caregivers didn’t bring up or weren’t aware of, Kiss says.

“It’s amazing how often we find it, and when we bring it up they’re like, ‘Yes, I’ve been having these feelings.’ Sometimes parents are quite surprised with what we find,” she says.

That’s why it’s so important to talk about mental health on a regular basis, even if your child seems to be doing fine. If the day comes when they aren’t, they will have an entire history of conversations with you as a reminder that you’re open to listening, Sedlar says.

How to talk with kids and teens about mental health

The way you frame the conversation will depend on how old the child is, both Sedlar and Kiss emphasize. Here are some tips for starting the discussion.

No one can have a meaningful in-person conversation while looking at a screen; this goes for both your child and you. Nixing the talking, texting or scrolling through Facebook will help you both focus more on what the other is saying.

The less distracted you are, the more you’ll remember what they told you, Sedlar says. This means if they repeatedly bring up something that clearly bothers them — like a certain kid at school who’s bullying them — you’ll be able to put the pieces together even if they aren’t entirely forthcoming.

Validate what your child says

Validation can take several forms. If you want to make sure you heard them right, repeat it back to them: “So my understanding is that you’re upset because…”

You can also show that you recognize how they feel by saying something like, “It seems like that really upsets you. I can see why that makes it hard for you to focus on other things.”

Even if you don’t personally agree with their reaction to something, try to understand their perspective. However you choose to do this, it reinforces that you’re paying attention and really listening to them.

“You want to come off as nonjudgmental and that you want to try to understand,” Sedlar says.

Likewise, try to ask questions in a way that is focused more on fact-finding and less on passing judgment. Your goal is to find out what’s going on and why, not express your personal feelings.

If your child or teen isn’t the talkative type, you can try making observations and asking if they’re correct. For example, if you noticed your teen isn’t spending as much time with friends, point this out and ask why. This will show that you pay attention to what’s going on in your kid’s life and that you want to be aware of any problems they may have.

For young children, it can be helpful to find ways for them to represent their emotions visually. This could mean finding a picture book with a story whose characters express different emotions, or using a daily emoji chart and asking kids to pick the emoji that represents how they feel that day.

For older kids and teens, hearing stories of other young people who have struggled with mental health issues can reassure them that they aren’t alone. Many young celebrities have been open about dealing with things like depression and anxiety, so those could be stories worth sharing.

Listen without trying to fix it

As a caregiver, you may want to step in and fix something when it’s not going the way you want it to for your child; to do everything in your power to make sure they succeed in life.

When it comes to mental health struggles, the unfortunate reality is that sometimes there isn’t much you can do. You can make your child feel supported, but you can’t make their anxiety, depression or other issues go away.

It can be hard to step back when all you want to do is make things better, but trying to ‘fix’ a mental health issue simply doesn’t work and can come off as intrusive. Instead, listen to what your child needs, connect them with resources like doctors or therapists who can help, and be their support system as they navigate this new challenge.

You may think you have to be a pillar of strength for your child and not show weakness or vulnerability, but that’s not true, Sedlar says.

“Modeling sharing about your emotions and challenges shows that it’s OK to talk about feelings and that it’s normal and common to have mental health struggles,” Sedlar says.

If your kid or teen is struggling with anxiety, tell them about that time you had a panic attack at work. If they’re feeling depressed, share your experience at college when you went through a particularly low period in your life. Show your child that you’ve struggled, too, but that you’re resilient and that it’s OK to ask for help if needed.

The point isn’t to burden your kid with your negative experiences; the goal is to show that everyone struggles sometimes, even their caregivers. Since caregivers are role models, this is a particularly powerful message to send that could provide some reassurance that everything will eventually be OK.

Though the world is gradually getting more open-minded about mental health issues, the fact is that stigma still exists.

It hurts to think that someone would harbor biases toward your child, but the truth is others may judge them. Instead of making false assurances that this won’t happen, be honest about stigma.

Sedlar recommends addressing it directly and getting them to think about why someone might have reacted in a judgmental way.

“Help them to see it outside of themselves and not personalize it,” she says.

Remind your child that, while stigma does exist, most people they interact with will simply be concerned and want to help because they care.

How to talk about suicide

It’s important to face the facts: Suicide is the second-leading cause of death among people ages 15 to 24 and has been increasing in recent years. It’s more common in boys, but recent research found that it’s on the rise in girls ages 10 to 14.

It doesn’t have to be a long or complicated conversation. You can simply state that you know suicide happens in young people. Ask if your child has ever felt so sad that they didn’t want to keep living. Remind them that if they ever feel that way, they need to talk with you because you can help.

Suicide is preventable, but only if you know your child is struggling and can intervene.

“A lot of people want to ignore it and say, ‘That’s not my kid,’ but you have to be willing to have those conversations and face it,” Sedlar says.

What to do if your child is struggling

If you know your child is struggling with a mental health issue, the best place to start is their pediatrician or primary care provider, who can help refer you to a therapist. Therapy that is backed by extensive scientific research is the best kind to look for, particularly a type of therapy called cognitive behavioral therapy, or CBT.

Yet, Kiss also wants caregivers to realize that therapy isn’t a quick fix, and it’s not always easy to get an appointment with a therapist.

Another option that primary care providers can help with is discussing medication options with the child and caregiver. Medication won’t be appropriate in every case, however, and is usually used only in more severe cases, Kiss says.

Stress, anxiety and depression are a normal part of life. Sometimes they start interfering with a kid or teen’s life enough that professional help is needed. Sometimes all a child needs is to talk with a supportive adult.

Ultimately, the most important thing is just to be present in your child’s life, Kiss says.

“I think the family connection is critical. We’re all so busy these days, we spend more time running around than sitting down together. The best thing parents can do is stay connected to their kid,” she says. 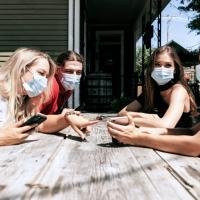 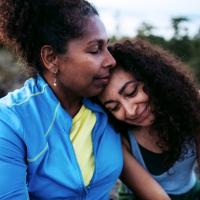 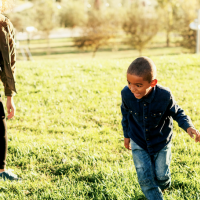