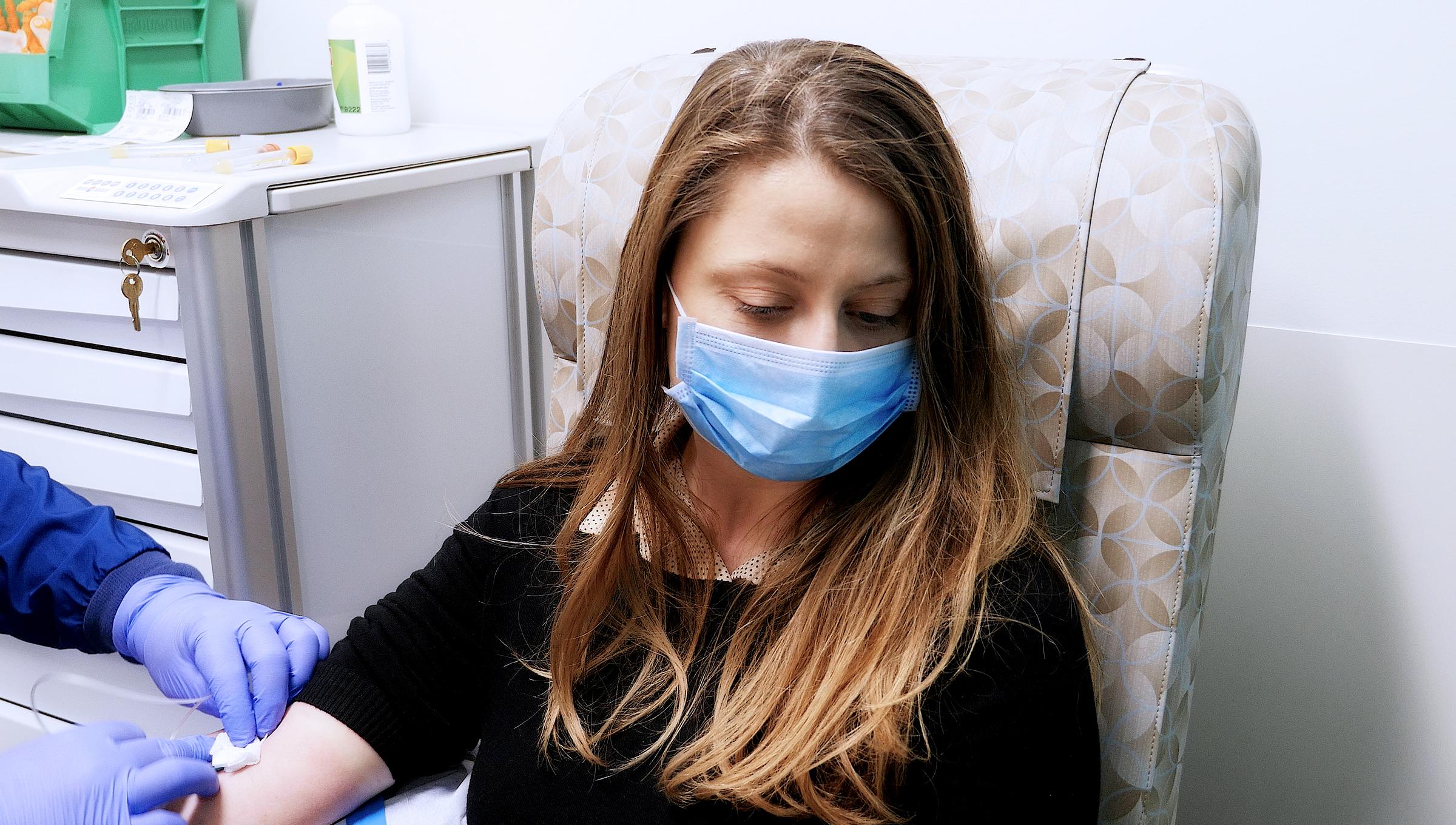 On May 5, 2020, Naomi Ulici Watts was one of the first people to get a COVID-19 antibody test. She knew the antibody test results would be positive (they were).

Back in February, however, when she thought she just had a bad case of the flu, Naomi couldn’t have begun to imagine the havoc that the new coronavirus would soon wreak on her life — and the resilience she would develop because of it.

A bad case of the flu

It was the second week of February when Naomi, who recently returned from a trip visiting family in California, got what she describes as the worst flu of her life.

Her fever lasted nearly a week. She couldn’t keep any food down and became starved and dehydrated — even drinking water made her feel nauseated.

“I’m the person that when I’m sick I’m still cleaning the house and cooking. I knew it was bad because I didn’t have energy to do anything except lie around,” she says.

Once her fever broke, the chest heaviness, cough and exhaustion set in. Though she felt somewhat better, she wasn’t fully recovered. She wanted to slowly return to normal life, like work — but was also somewhat reluctant.

“I never usually go to work sick, but this time I did,” she says.

She works at two separate locations. One is a private office — she kept the door shut while she was there. But her other workspace is a cubicle in a shared area.

“I went against my instincts by going in. I’m lucky other people didn’t get sick,” she says.

Then on February 28, Naomi finally starting to feel better and, with her fever long gone, she visited her visited her 70-year-old father, Paul.

Her father’s life, in danger

Twelve days after her visit, her dad started feeling sick and feverish.

It was already a stressful time for the family. Naomi’s sister, who their father lives with, was suddenly out of work when her employer’s hair salon closed due to the statewide stay-at-home order. Worse, the beginning of March marked a year since Naomi’s mother had passed away.

Her father went to the doctor to get a COVID-19 test. In the early stages of the pandemic, testing took much longer than it does now, so he was told he would get a call with results in four or five days.

Before that could happen, however, Naomi’s sister found him collapsed one night on the floor.

“My sister took him to ER and he took the COVID-19 test and got results 4 hours later; it was positive. They deemed him able to recover at home, so he went home for a few days and then got way worse,” she says.

After a second ER trip, he was admitted to the hospital with COVID-19 pneumonia. 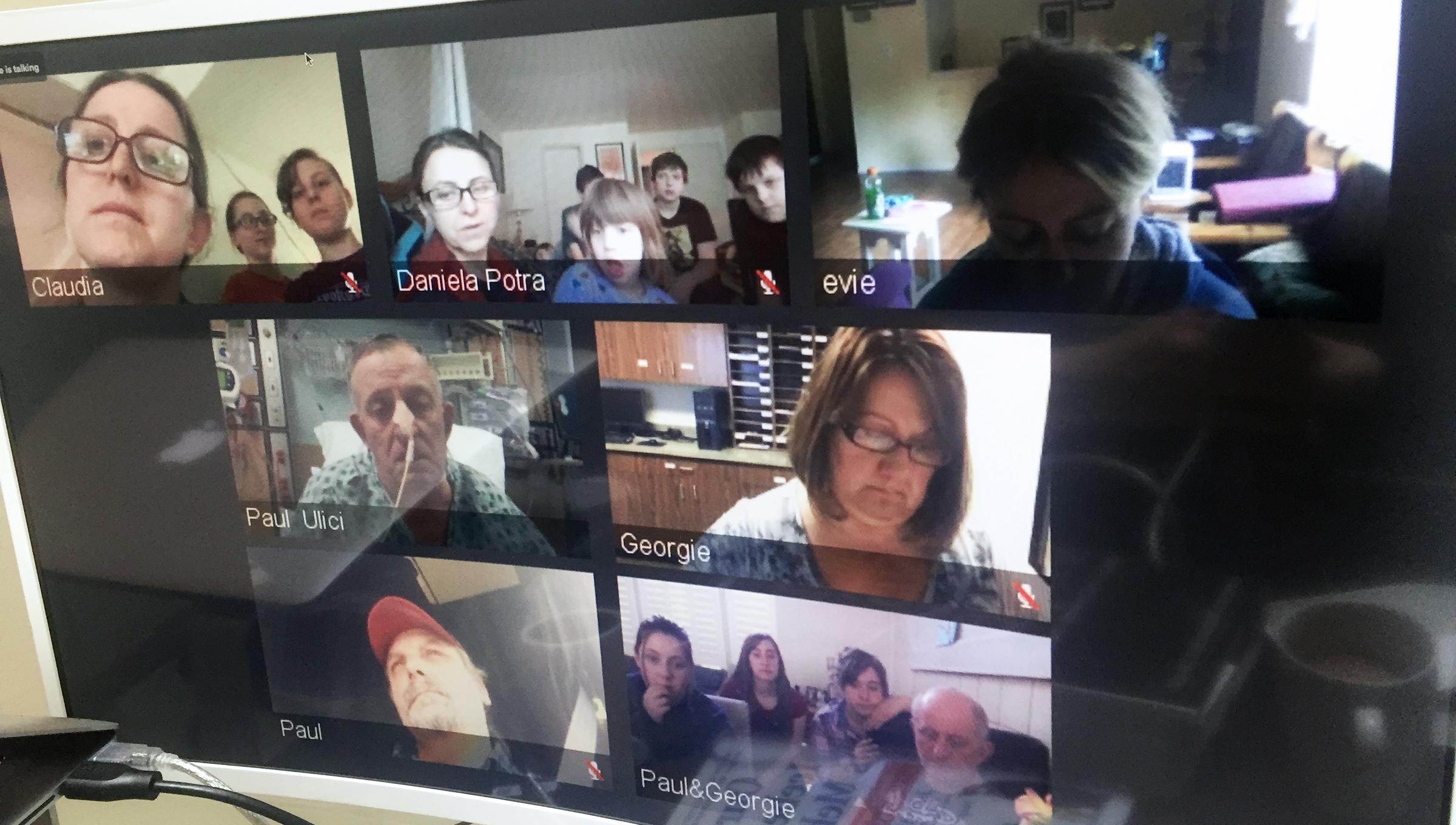 Paul Ulici’s family virtually visits him during his hospitalization.

On his third day at the hospital, Paul was moved into the intensive care unit. His condition seemed to be slowly deteriorating. When Naomi tried calling him, he was too disoriented to operate the phone.

“I put flowers on mom’s grave for him and took pictures, but he was too sick to look at his phone and see the pictures,” she says.

She began to face a sobering possibility: that she would lose her father exactly a year after she lost her mother.

That night, he was put on a ventilator. His oxygen levels were so low that he needed 70% oxygen, she says.

Naomi and her family were terrified.

“I asked the doctors to do a video call in case he never woke up. During the call, he was sedated. All I could do was tell him I loved him. As I was hanging up, I saw the team rush in to intubate him. I wept in my husband’s arms. I was inconsolable,” she says.

What followed were several tense days. Describing herself as a “border collie who needs a project to do,” Naomi began coordinating calls with her dad’s doctors twice a day, then relaying that information to her four siblings.

The team at the hospital brought an iPad into the hospital room for family video calls with all five of Paul’s children and 15 grandchildren. For the first few days he was still sedated and couldn’t respond — other than squeezing a nurse’s hand to let his family know he could hear them — but after four and a half days, when he came off the ventilator, Naomi says he started to cry.

“Our family is disconnected: we all live in different states and he doesn’t get to see us all together much, but now he could see us all on screen,” she says.

When her dad was taken off the ventilator, it was a relief — but the family’s struggles weren’t over. Her dad was starting to feel traumatized by his experience, she says. He tried to tear out his feeding tube several times and was strapped to the hospital bed.

Meanwhile Naomi’s sister went to the ER for respiratory issues. After what was likely a false negative COVID-19 test, an X-ray showed patterns typical of someone recovering from COVID-19. The ER doctor was certain she had it, and sent her and her feverish 10-year-old daughter home to recover.

After 15 long days in the hospital, her dad was released from the hospital and allowed to continue his recovery at home with Naomi’s sister.

“I let go of this big ball of anxiety and stress and sorrow. I was relieved I wasn’t burying him that day and grateful I had more time with him and for everyone who helped us,” Naomi says. 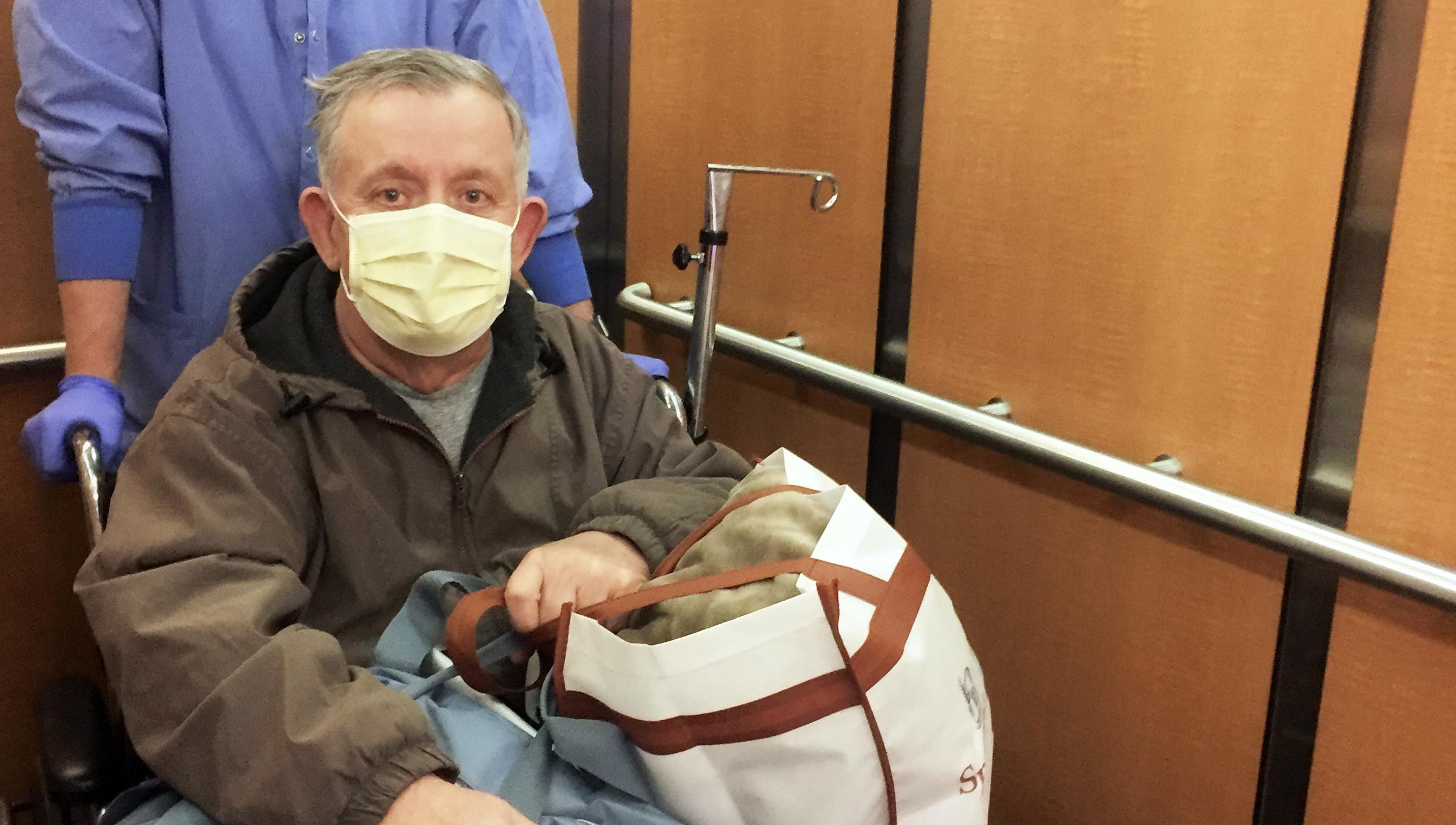 Both Naomi and her father haven’t been able to fully move past their time with COVID-19: While they’re no longer contagious, the effects of the virus remain.

He continues to battle a stubborn skin rash that requires medication. They’ve both been losing alarming amounts of hair. They’re both slowly working to regain physical strength. And they’re both dealing, in different ways, with the mental impact.

For her father, that impact manifests as post-traumatic stress disorder-like flashbacks and memories of his time in the ICU.

For Naomi, it’s the fact that she can’t do things she used to — like go to the gym — to help her mental health. It’s the fact that her shower drain clogs regularly from the hair she’s losing. It’s the fact that many of her friends no longer want to spend time with her due to fear of COVID-19 — which, she says, makes her “feel like a pariah.”

And, of course, it’s the fact that the antibody test she took in early May was positive. Though she wasn’t surprised by the results, that didn’t make them less painful.

“It was horrific to find out I had, had it. I’d already done the math in my head. I was sick before we knew COVID-19 existed, before the news started. I knew I could have possibly given it to my dad. Had he passed away … I’m not saying like I feel I would’ve blamed myself, but it would’ve added a layer of sadness,” she says. 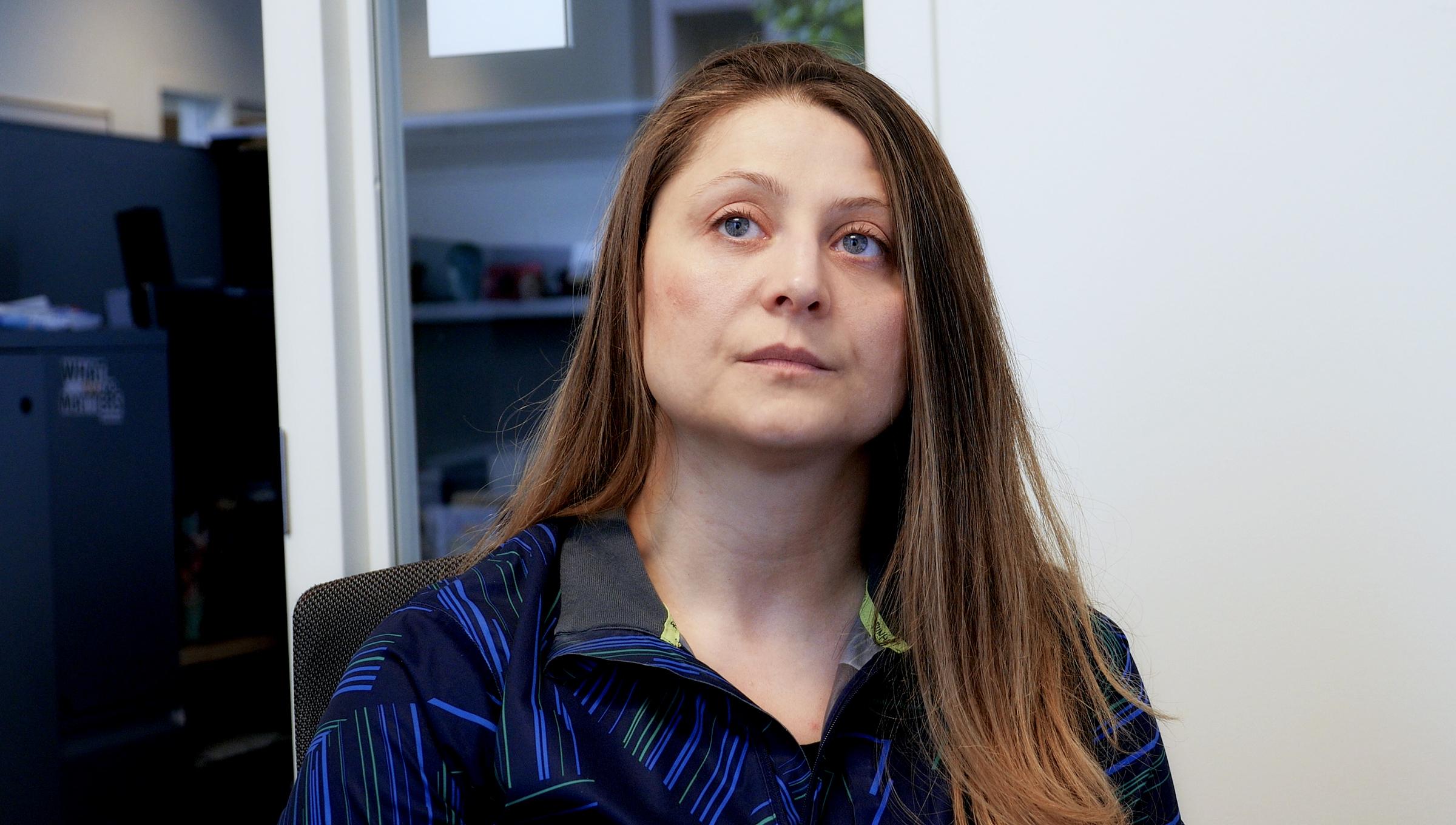 Naomi rediscovered her strength after getting COVID-19.

Despite her ongoing depression and reconciliation with what has happened to her and her family, Naomi leans into her faith and her own resilience.

She’s working on moving forward with her own life. She learned a lot about herself and her needs during her COVID-19 experience, she says.

“Before COVID, I had a robust social life. I recognize that I have to learn how to build socialization into my life instead of relying on it to just happen,” she says.

She’s learning to build intrinsic motivation to exercise at home more, instead of relying on a gym pass or friend group to keep her accountable. She’s been throwing Zoom parties and socially distanced gatherings for friends from her faith community. She and her family are connecting more and more authentically, putting aside differences and past fights about beliefs and politics and learning to listen to each other.

And, she’s learning more about forgiveness, for others and for herself.

“I don’t look at myself and see the beautiful Naomi, I see the Naomi who is balding and extra pudgy. I have to work at being compassionate to myself. This is just a period of time — and then I’ll get back to where I want to be,” she says. 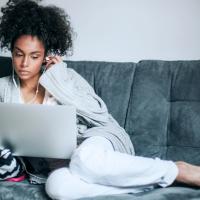 What You Need to Know About Creating a Living Will 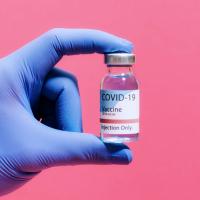 What to Know About COVID-19 RNA Vaccines 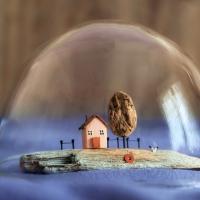 How to Form Your Family’s COVID-19 Social Bubble